View a larger version of the chart here.

Animal-based ingredients are commonly used in pet foods and are considered to have high nutritional value. This is not necessarily the case, however, as cooking temperature and processing conditions may greatly affect the quality and digestibility of protein-based ingredients (Batterham et al., 1986). Knowing both the protein quality and digestibility are needed to accurately formulate diets and ensure that dogs and cats meet their needs. Pet foods have many options in regard to protein-based ingredients, including meals that have undergone high heat processing (rendering), less processed protein sources (freeze-drying; pasteurization), and raw sources that have not been processed at all.

The cecectomized rooster assay may be used as a model for measuring nutrient and amino acid digestibility of pet food ingredients (Parsons et al., 1982). A surgical procedure, similar to a human appendectomy, converts the roosters into an effective, efficient model for dog and cat digestive systems. This model accurately estimates amino acid digestibility and allows for the study of both individual ingredients and complete foods.

Few studies have tested the effects of processing on pet food ingredient quality. Therefore, a cecectomized rooster study was conducted to determine the chemical composition, nutrient digestibility, energy content, and protein scores of chicken-based ingredients that had undergone different processing conditions (Oba et al., 2019). The test ingredients included chicken meal that had undergone the rendering process, raw chicken (freeze-dried), retorted chicken (heated to 250oF for 30 minutes, then cooled and freeze-dried), and steamed chicken (cooked to 200oF, held at that temperature for 10 minutes, and then cooled and freeze-dried).

All ingredients were ground prior to laboratory and digestibility testing. The analysis showed that chicken meal was the biggest outlier in terms of nutrient composition and digestibility. Chicken meal had the highest ash (mineral), protein, and most essential amino acid concentrations, but lowest fat and energy. These nutrient differences were likely due to losses that occur during heat processing.

Chicken meal had the lowest dry matter and organic matter digestibilities, with the other chicken sources being similar to one another. Steamed chicken had the highest amino acid digestibilities (Table 1). Raw and retorted chicken sources did not perform quite as well as the steamed source, but had higher amino acid digestibilities than chicken meal. Given its amino acid content and high digestibilities, steamed chicken had the highest protein quality scores. Protein quality scores were slightly lower for retorted and raw ingredients, but higher than that of chicken meal. In general, the raw, retorted, and steamed ingredients were pretty comparable. Based on all of the data, the steamed ingredient was the best, but all three less processed proteins were of high quality and had high digestibility. 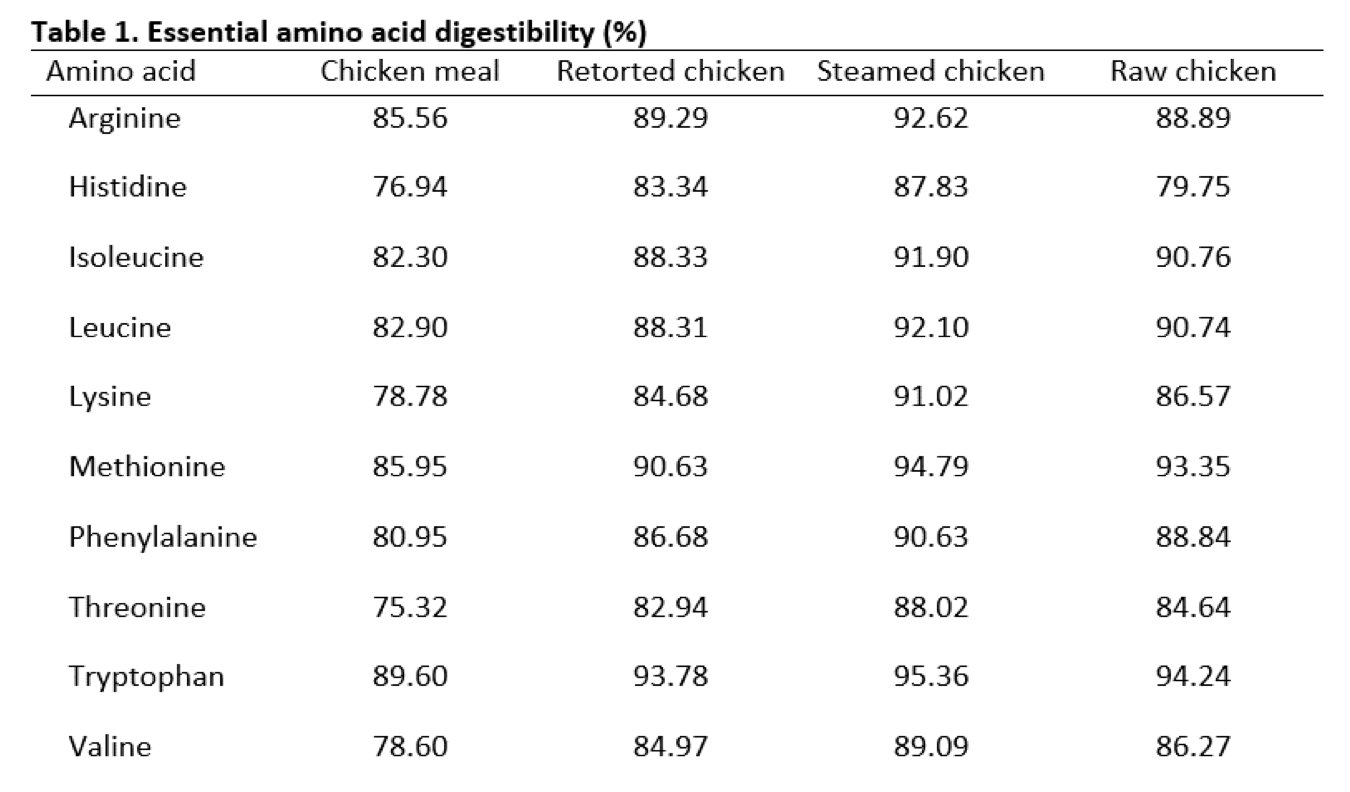